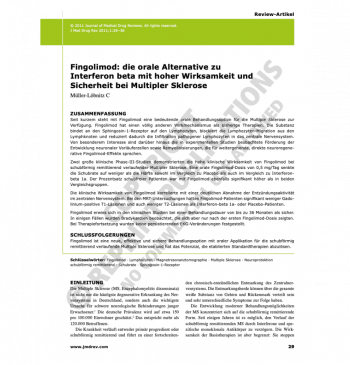 J Med Drug Rev 2011;1;29-36
(Review-Artikel in deutscher Sprache)
Fingolimod is a new significant option for oral treatment of multiple sclerosis. Its mode of action totally differs from all known standard therapies. Fingolimod binds to the sphingosine-1-phosphate-receptor on lymphocytes, blocks lymphocyte migration from lymph nodes and thus reduces the infiltration of autoaggressive lymphocytes to the central nervous system. Additionally, particular interest arises from the fact that in experimental studies the substance has stimulated the development of neuronal precursor cells and remyelination which both might be indicators of extended direct neurogenerative effects of fingolimod.
Two major clinical phase III trials have demonstrated the high clinical efficacy of fingolimod in relapsing-remitting multiple sclerosis. An oral fingolimod dose of 0.5 mg/day reduced the relapse rate to less than half compared to placebo as well as to interferon beta-1a. Fingolimod treatment also resulted in a significantly higher percentage of relapse-free patients than both comparator treatments.
The clinical efficacy of fingolimod correlated with a considerable reduction of inflammatory activity in the central nervous system. In MRI examinations, fingolimod patients showed significantly less gadolinium-enhancing T1 lesions and less T2 lesions compared to patients treated with interferon beta-1a or placebo.
Fingolimod has proven to be safe in all clinical trials up to 36 months treament. In some cases, bradycardias have been found, but only after the very first dose of fingolimod. When therapy was carried on, no persisting ECG abnormalities occurred.
Conclusions: Fingolimod is a new, efficacious and safe option for oral treatment of relapsing multiple sclerosis and carries the potential to replace established standard regimens.
JMDR_Fingolimod2011Web