Dabigatran for prevention of ischemic stroke in atrial fibrillation: Is the era of vitamin K antagonists coming to an end? 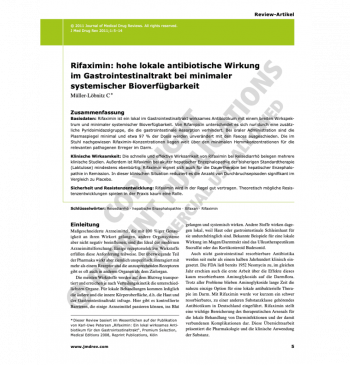 J Med Drug Rev 2011;1;5-12
(Review-Artikel in deutscher Sprache)
Basics: Rifaximin is an antibiotic exerting local activity in the gastrointestinal tract with a broad efficacy spectrum und minimal systemic bioavailability. Rifaximin differs from Rifampicin only by an additional pyridoimidazol group inhibiting gastrointestinal absorption. Plasma levels after oral intake are minimal, about 97 % of the administered dose are excreted unchanged with the faeces. Rifaximin concentrations measured in the faeces are considerably higher than the minimal inhibitory concentrations of the relevant intestinal pathogens.
Clinical efficacy: The fast and high rifaximin efficacy in traveler’s diarrhea has been demonstrated in several clinical studies. Rifaximin is also used as associated therapy in acute hepatic encephalopathy with an efficacy at least equal to the current standard treatment (lactulose). It is also well suited for the maintenance treatment of hepatic encephalopathy in remission and reduces the number of breakthrough episodes in this clinical setting significantly compared with placebo.
Safety and development of bacterial resistances: Rifaximin is generally well tolerated. The theoretically possible resistance development does not play a role in clinical practice.
JMDR_Rifaximin_2011Web